Adam was born by caesarian July 3, 2003 after a normal pregnancy that lasted 39 weeks. He wasn’t breathing properly at birth and had to be intubated – he spent two weeks in the hospital. During that time he was diagnosed with Bi-Lateral Vocal Cord Palsy (his vocal cords were not opening or closing as they should) but luckily it resolved by itself. He had other breathing issues that led to a diagnosis of Laryngomalacia (floppy trachea) which was aggravated when he got upset and was gasping for air- he still has some mild stridor. 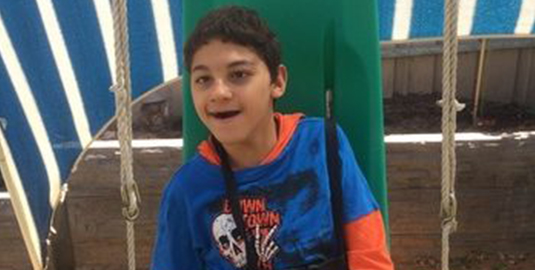 From the time Adam came home from the hospital he was always upset; he hardly ever slept and was difficult to feed, nothing like his older brother when he was a baby. At three months they noticed his head wasn’t growing as it should and he was diagnosed with Microcephaly. That led to more tests, including an MRI, EEG etc and they found he had dysgenesis (thinning) of the Corpus Callosum. He didn’t meet any milestones and had global development delay. After many months of Adam screaming and not sleeping, they finally did a PH probe test. It showed severe reflux and he was put on Losec-it made a huge difference and he was finally able settle down. Adam was also very fidgety and was diagnosed with choreoathetosis (involuntary excessive movement); we tried several medications but found they made the movement increase. Adam continues to have extreme movement some days worse than others depending on seizure activity or medication changes.

At seven months they labeled him with Cerebral Palsy as they had no ideas. They went on to test him for multiple things, including Rett, Angelman and ARX syndromes etc and still nothing. We persisted in seeing the genetics doctors (which were great) and we were all keen to continue testing.

Finally after a micro array test in 2009 at the age of six, Adam was diagnosed with 14Q12 micro deletion on part of the FOXG1 gene. Adam does not sit, crawl or walk. He is orally fed but this is a long process and it takes up to an hour to feed him.

Adam’s seizures started at eight months old and he continues to have uncontrolled seizures. We had tried just about all medications. We don’t know if it’s a coincidence but since being on clonazepam he has only had one tonic seizure in six months. During tonics Adam holds his breath and spasms which, needless to say, is very scary. As a result he had many hospital visits when he was younger, and now ha midazolam (an emergency medication and oxygen for any bad episodes. Adam continues to have daily laughing seizures that can last 5 – 10 minutes and is also on Topamax.

Adam is a beautiful, now happy boy who loves interacting with people. He has high muscle tone, tight hamstrings which he has Botox injections for and is still on reflux medication. Adam has a range of equipment that includes a wheelchair, standing frame, walker, hospital bed, shower chair, toilet chair, tumbleform chair and corner chair. Adam is non-verbal but trying to learn the PODD for communication. He uses yes and no symbols well and has a buzzer on the tray of his wheelchair as a way of calling out for the toilet or something else he wants, but this is not always consistent. He has Second Skin Lycra arm splints to help dampen the movement and we are looking into a suit.

Adam attends a main stream school Monday to Thursday; the school has a disabled unit on site. He goes to three mainstream classes a week and loves the kids fussing over him. At this school he also does conductive education. Fridays he goes swimming and Saturday mornings he goes horse-riding. Adam loves music, swimming, shopping and his older brother Justin who is 13.

As we continue this journey we worry what the future will bring, but I also live in hope that there will be something that will help. For us getting rid of seizures would be huge and for Adam to communicate better and tell us what he wants!